For most, it is a small piece of local paradise, a chance to beat the heat, catch a fish, take a hike, or snap a photograph. Any local knows you always arrive early (parking can be tricky) and do not forget your socks (the rocks are slick!). Whatever your reason for visiting, Turkey Creek Nature Preserve is a place of unique beauty that attracts thousands of visitors every year. Many visitors, however, are unaware that in addition to its rich natural resources, the Preserve plays a pivotal role in Alabama’s early industrial development. In fact, the most popular destination at Turkey Creek Nature Preserve, known simply as The Falls, was once the center of one of the biggest industrialist operations in Alabama, and the home of John T. Hanby.

Around 1774, John Hanby, was born into the machinist’s trade, in Henry County, Virginia. It is believed that Hanby operated a small forge in Virginia, where he crafted a variety of tools, locks, and bored rifles. Around 1800, Mr. Hanby sold his land in Virginia and eventually made his way down to Lincoln County, Tennessee. During the War of 1812, John Hanby received a Captain’s commission in the 49th Regiment of Lincoln County. Under General Coffee, Hanby traveled down through Alabama working as a machinist and blacksmith. Many believe that Coffee’s regiment camped near Turkey Creek, as they journeyed south. If they did, Mr. Hanby’s keen observation skill and business savvy may have alerted him to the rich opportunity for development along the banks of Turkey Creek. Another theory suggests that Hanby may have relied on tips from prospectors to the region. Whatever the cause, after his military service ended around 1819, Hanby and his family settled at Turkey Creek.

While Hanby’s enterprises were spread across present day northern Jefferson County and Blount County, his operational center was located in Pinson. His operation at the Falls was believed to include not only his home, but also, a Dam, grist mill, forge, and a niter works.

Mill Dam: Mr. Hanby choose his site carefully, with the knowledge that his work would require not only rich mineral resources, but also the means to power his bellows and grist mill.  Observant visitors to Turkey Creek Nature Preserve may have noticed a clue to how he produced this power, as well one of the first structures Hanby developed. Approximately 100 feet upstream of the “Big Rock”, a straight line of 19 small holes is bored into the rock. These holes once held iron pins, which provided support for a 6-foot tall wooden dam that tamed the waters of Turkey Creek.

Grist Mill: From the dam, Hanby harnessed the power of Turkey Creek waters down a wooden flume to a large waterwheel. Investigations of the area suggest that this wheel, as well as Hanby’s Mill, were located on or behind the “Big Rock.”  Hanby’s mill wall can still be seen today opposite the “Big Rock.” This mill is likely to have grinded wheat into corn and flour for people as far away as Tuscaloosa and Selma in addition to have providing power for another source of revenue for the Hanby family, his forge.

Forge: From the Mill, belts were used to drive a bellows, producing fire hot enough to smelt iron. While this area is still under careful archaeological examination, artifacts including slag, hand forged nails, and brown ore confirm its relative location on the flat, glade next to the current road. The Hanby family is likely to have smelted brown ore for simple tools, kitchenware, horseshoes, and even possibly guns.

Hanby Homesite: An unnaturally flat spot of land on the hill above the Falls, is suspected to be the site of Hanby’s home. This flat area measures approximately 96 feet long, and would provide enough space for a small living quarters for himself and his family.  Nearby, a cold water spring head lined with stones is evidence of a possible cold food storage building. Many people today believe that Hanby’s home was relocated around 1910 by William Nabers to a site across from the Blue Hole. Mr. Nabers home was destroyed in a fire in the 1960s, so very little evidence remains.

Sometime in the 1820s, John Hanby’s son, David Hanby, began to take over the Hanby enterprises. The story of David Hanby starts with turbulent raft rides and ends in flames. Check back next month to learn how this story ends!

For more information related to the history of the Preserve, come out for one of our Living History Programs. Event dates can be found on our events calendar.

Next week, contributing author Lyn DiClementel, will provide readers with some insight into the importance of controlling stormwater runoff in her column “JeffCo H2O.”

Until then, we’ll see ya downstream! 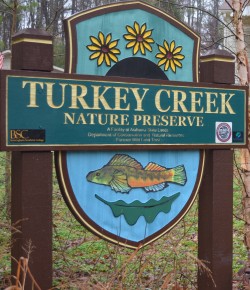 Welcome to the newly developed Turkey Creek Nature Preserve blog and website! Through this site, our goal is to provide the public with a steady stream (pun intended) of information in topics relevant to the life of TCNP, ranging from history and the environment, to events and support opportunities. We have a fantastic group of contributing authors volunteering their time to help make this blog possible. Weekly updates are scheduled, with occasional bonus posts of supplemental materials. If you have any suggestions, or would like to contribute your own articles, please contact Charles Yeager at cyeager@bsc.edu.

Until then, we’ll see ya downstream!